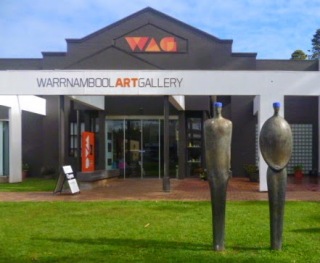 Well, I guess every major town deserves an art gallery, even if it turns out that there isn’t all that much inside – which is what I discovered at the Warrnambool Art Gallery, otherwise known as The WAG (though that sounds like something you do when you don’t want to go to school, however it is also interesting that when you are working, you don’t wag work, you chuck a sickie – or at least that is what you do in Australia).

I should mention that I was quite chuffed when I was wandering through Warrnambool and discovered that they actually had an art gallery. I really like art galleries, especially ones with paintings in them (though if it is an art gallery, you probably would expect them to have paintings, unless it is a gallery devoted to modern art, but then they generally go by the name of ‘museum of contemporary art’ – or at least the one in Sydney does, as does the one in New York). When I first discovered it there was a restored MG and Valiant sitting on the lawns, however right before my eyes a couple of guys walked up to them, climbed inside, and proceeded to drive them away. I am still wondering whether they were actually a part of the display, or whether a couple of guys decided that they had the right to simply park their cars on the lawn.

Anyway, while I really wanted to go inside, I was a little conscious of the time so decided that I would instead come back the next day, and after a quick check of the times noted that it would be open. It was then that I discovered that I seem have this really bad luck of missing out on some really cool exhibitions. On two large posters out the front was an advertisement for an exhibition called From the Sacred to the Profane. This immediately caught my interest right up until the point that I discovered that the exhibition had finished the week before. In a way it was a little silly, especially since they could have left it going until after the Easter Weekend, but there were probably factors beyond their control (namely the owners of the paintings wanting them back). However, they appear to have a video about the exhibition on their website, which is also up on Youtube (though I haven’t watched it yet), so I will embed it below.

Anyway, that particular exhibition, according to their website, is about the transition of art during the renaissance from the predominantly Biblical art of the Middle Ages to art that explored many of the myths from classical Greece and Rome. It was a period when there was a renewed interest in the Ancient World and the foundations that were left by the Greeks and the Romans. There also seems to be a movement towards acceptance of nudity in art, though not in the way that we see in the modern pornography industry, but rather an understanding, and admiration, of the beauty of the human body. 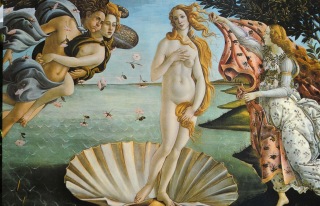 Anyway, the next day, after church, and visiting a couple of other places around Warrnambool (including having a drink at my favourite pub – the Warrnambool Hotel), we decided to go and have a look inside the art gallery. I was expecting to spend around about an hour here wandering about and looking at the many and varied works of art that were on display only to discover that there were basically three galleries, two of them mostly empty. There was one gallery that did have a number of artworks on display, however they were all drawings, and they were also all for sale. That didn’t really surprise me since there are quite a few galleries around the place that exist to sell original works of art. Sometimes I wonder whether I could walk into the National Gallery of Victoria, slap a heap of cash on the counter, and walk out with Picasso’s Weeping Woman. For some reason I don’t think so (though somebody did manage to steal it in 1986, and demanded that arts funding be increased by 10% per annum for it to be returned).

Anyway, they also had what they called The Display of the Month in this gallery. I’m sure there is a meaning behind this work of art (if one considers it be be art, which I do, even though it does fall under the category of Contemporary Art), but I simply looked at it, took a photo, and then moved on to look at some other works.

Sometimes I wonder about contemporary art and whether any real skill goes into producing it. I guess it depends on the artwork because some I suspect take a lot of time to produce, while others simply involve an artist throwing handfuls of dirt at a canvas and then putting it on display. I’m sure it does work, and if one already has a name as an artist one could get away with pretty much anything (and some have done just that, such as Duchamp’s Fountain).

So, after pondering the display of the month for about thirty seconds, I then moved on to the next gallery past a rather garish sculpture of a jockey on a horse.

The next gallery, as small as it was, was simply one of those modern art rooms with a video projecting onto the wall and some random sculptures in the centre. There were a couple of paintings in the wall, but that was pretty much it. So after taking in the video, and wandering around the sculptures, I moved onto the next gallery only to discover that this was the final one. A part of me was expecting there to be quite a few more, however that didn’t seem to be the case. Also, just like the other gallery, there seemed to be a lack of art work. Don’t get me wrong, there were some paintings on display here, but not many. There was a really cool wood carving of the old Warrnambool Hotel, and there was what could be considered to be the pinnacle of modern art – a blank canvas that had been framed. The room had a few other paintings as well, but other than that the gallery felt really, really empty. 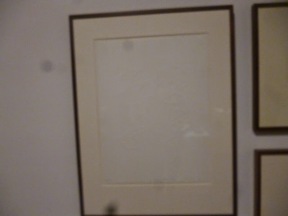 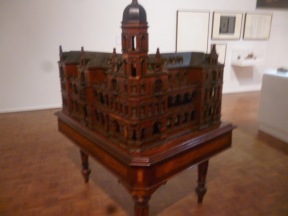 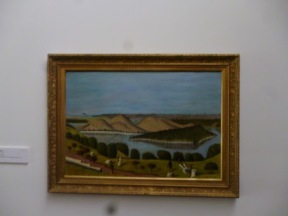 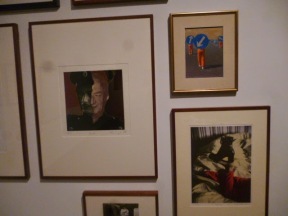 I guess you could consider this art of art

They also had a couple of interesting displays were they would put two paintings next to each other (or even a painting and a sculpture) to provide a contrast. In fact I actually liked how they would contrast some of these paintings, and in a way by having them next to each other made them stand out even more. I guess the best way to demonstrate this is to show you some pictures: 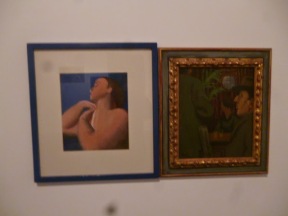 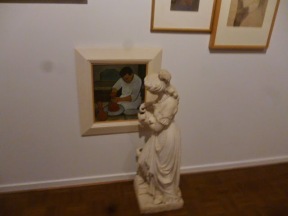 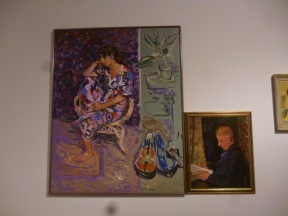 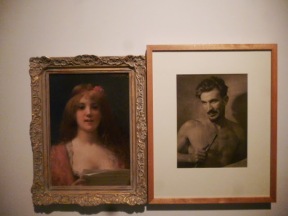 The bottom two are my favourites

There was also a painting that seemed to be damaged, namely because it has a hole in it.

Also, something that didn’t surprise me, but it still felt a little out of place, were some items that had been dredged up from the sea floor from the multitude of shipwrecks that occurred on this part of the coast. It is not hard to find relics from sunken ships around here, it just seemed to be a little out of place in an art gallery. 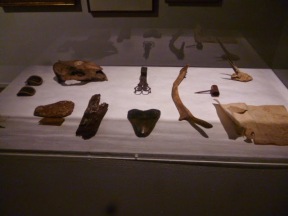 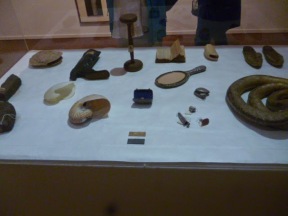 Maybe they were just looking to fill up some empty space.

Well, while it took me little more than fifteen minutes to explore this art gallery, it did give me an opportunity to go and explore Warrnambool a little more, especially since our next port of call was going to take much, much longer.

Warrnambool Art Gallery – A collection of Random Paintings by David Sarkies is licensed under a Creative Commons Attribution-NonCommercial-ShareAlike 4.0 International License.
If you wish to use this work commercially please feel free to contact me.