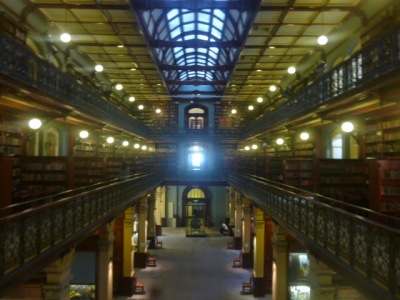 Back in the days when I was a teenager I used to spend most of my free time down at the State Library of South Australia (the State Library) because, well, I was a geek and the State Library was geek central. I remember once going over to Sydney and checking out the State Library of New South Wales and noted that it was nothing like the library back home.
You see, the State Library had two things going for it – an area set aside called the Youth Library which was full of books targeted to us youth (which today would probably fall into the category of Young Adult fiction), and they had computers. Okay, they had a suite of PCs on the other side of the library, but the two computers in the Youth Library (which were both Commodore 64s) were specifically for games, and they were the major draw card of the library (and in fact you had to book days in advance sometimes just to use the computers). I remember that these computers used to the the unofficial ‘Young Commodore 64 User Group of South Australia’ meeting spot (not that we ever called ourselves that, this was just something I made up off the cuff).
The other thing about the Youth Lending library was that it was also the meeting spot for a lot of roleplayers back in the days that Dungeons and Dragons was still in its infancy (and was starting to attract a lot of flak from certain sections of society). It was not uncommon to wonder into the library to find a group of people laughing, rolling dice, and pretending to be all sorts of things that they could never be in real life. The library even had some Dungeons and Dragons books available to borrow (though most of them disappeared over the few years I spent there).
However, that was years ago and many (actually almost all of) my friends from those days have all drifted off into obscurity (and I can’t even find them on Facebook, though probably because I can’t remember many of their last names). During that time the State Library also changed a lot (there are no longer any Commodore 64s and the Youth Lending Library has also disappeared) so upon returning to Adelaide for a couple of weeks I decided to do something that I had not done in all the time that I had been here – check it out.
As mentioned, one of the major changes to the State Library is that the lending library is no longer located there, but rather is now the Adelaide City Library (which is now located on Level 6 of Rundle Place). However, there are somethings that have never changed, such as the long rows of bookshelves holding all manner of resource materials.
There are all manner of resource materials located here including a multitude of newspapers and magazines (many of them having been placed onto micro-fiche, though they do have a number of readers so that you can easily read the content). There is even an old printing press located here.
However, as I have discovered, there is a lot more to the State Library than just a very large room containing books, newspapers, and micro-fiche readers (and not forgetting the printing press). There is a media centre, which is basically a lounge area where people take advantage of the free wi-fi on offer, as well as a couple of galleries, one which contains a number of old books with scientific drawings of plants and animals, and another that has art exhibitions (usually in the form of Modern Art).
The exhibition that was on when I paid the library a visit was called Brimble Box and seem to be an exhibition that explored the relationship between art, nature, and science. The exhibition seemed to express, through sculpture, a criticism of how industry is destroying the natural world. There was one particular sculpture that stood out: a giant laughing robot with two oil tankers as its feet. The whole exhibition seemed to indicate how art and nature is being destroyed by industry and the desire for perpetual profit. In fact art is being subsumed by industry through commercialised music and advertising.
What I did discover on my self-guided tour of the library was across a glass walkway into one of the older buildings (I believe that it was once called the ‘Mortlock Library’ – which you must admit sounds quite sinister). In here is not only three levels of shelves all crammed with dusty books, but also a museum that explores the cultural history of South Australia. This building, I suspect, is one of those places that are missed not just by the tourists but even by the locals (I lived here for ages and never realised that this was here).
As you wonder around this august hall there are displays that look at all aspects of the development of the culture of South Australia from the first explorers (and they even have old maps on display) to many of the events with which Adelaideans are familiar. The largest display is in relation to the wine industry, which is not surprising since South Australia has some of the largest wine regions in the country.
However if, like me, you are not particularly interested in wine and wine making, there are other parts of our culture that they explore, including the Fringe Festival:
As well as one display that contained a number of games and toys that were made here in the past (and there is an operational toy factory in Gumeracha a short drive out of the city).
However, the State Library will always have that special spot in me as a place where I spent a lot of my youth hanging around with geeks like me.