Well, maybe you are wondering why a pacifist is visiting, let alone writing a post about, a military museum. To be honest museums interest me, and my brother also loves going and visiting them, and since this is just around the corner from my parent’s house I thought I might go and check it out (though it is only open on Sundays, however don’t take my word for it – check out their website). Mind you, while I have no intention of making this some extreme left-wing anti-war post (especially since I do lean towards the political left), I might say a few things about the military as I go along. However, to make it clear, while I do support the military and do believe that it is one of those necessary evils that we need, I also believe that if we are going to deploy our troops we shouldn’t simply do so without serious thought, and debate, as to why we are doing so.
Anyway, enough of that because I would rather talk about this museum rather than the pros and cons of the military (and I may end up writing about it at another time). The first thing you should know is where it is located because it can be a little tricky to find. So here is a map:
The museum itself is located in what used to be the Defence Science and Technology grounds (before the government reduced its size and then sold off a bunch of land to defence contractors, among others). As I mentioned, it can be a little difficult to find because a lot of these roads have been blocked off (namely because people used to use these roads as short cuts, and there was a time when speed limits didn’t apply to federal government land), however there are some useful signs that will point you in the right direction (if you can find them). You will know that you have arrived due to the armoured personal carrier parked out the front.

It is probably not surprising that the museum is located where it is because there is an airbase nearby, and this area was once where scientists worked on technology such as rockets, radars, and signalling devices. However they didn’t actually work on military vehicles (in fact, as far as I am aware, Australia never really built its own military vehicles – we just bought them from overseas). Still, it was government owned land and it probably is the best place for such a museum (though it can be even more difficult getting here without a car).

Normally, when you think of a military museum you probably thinks of tanks, guns, and artillery pieces (I know I do), but while they do have a few tanks and cannons amongst the collection, there is actually a lot more to the military than just ways and means of killing people (though I don’t remember seeing any guns here here, only artillery pieces). For instance, there are quite a few trucks and jeeps in the museum, which play a very important role in a modern war. As well as transporting troops, trucks are also required to transport supplies to the front line. Okay ,most of these trucks date back to the 40s and 50s, but they still play an important role today. In fact a military would be quite inefficient if it only had tanks and guns (though there are armoured vehicles for supply purposes as well). Oh, one of the vehicles they had on display was a fully self-contained kitchen.

Like many of the museums that I have been to there seems to be little order among the major displays, particularly where the vehicles are located. Okay, they do seem to have a lot of space outside, but considering that pretty much all of these vehicles have been restored (meaning that you can drive them), leaving them out on the grounds overnight might encourage some of them to go missing (though I’m sure hardly anybody would notice a tank cruising down the street at 2:00 am in the morning).

Anyway, as much as I want to post some more photos of military vehicles, this isn’t actually a photo album (though you probably could be mistaken if you have looked through some of my albums on Facebook – especially the photos that I took in Europe). This museum does contain a lot more than just military vehicles, though they do take up most of the space (probably because of their size).

One of the rooms is dedicated entirely to the signal corps. For those not in the know, the signal corps is the communications arm of the military. They are those guys that you see in Vietnam War movies carrying those huge radios on their backs, and the lieutenants grabbing their phones to receive orders from the command centre. Once again this could lead into a criticism of the modern military, and how there can be little scope for independent thinking among the rank and file – but I think I will leave it at that.

Once again, this room seemed to be focused more on completeness as opposed to looking at any specific development of the devices. In fact, like other parts of the museum, this room was chock full of communications devices. There were so many devices in here that it simply made my head spin. Surely the military didn’t change their communication equipment as often as I changed my underwear – but in many cases it certainly looked like they did.

Most of, if not actually all, of this equipment looked really, really obsolete, though I am sure the military still use more sophisticated equipment than your average iPhone. Mind you, it is not as if the iPhone can’t deliver encrypted messages, but you do need towers to be able to transmit the information, which is probably lacking in many of the modern warzones. Still, you can get satellite phones, and as I suggested, you can still send encrypted messages across the internet on your humble laptop, which seems to put the general population on par with the modern military machine (at least in regards to communication).

Alongside the signal corps display, there was an trailer which was obviously designed for field communications.

They even had an old spotlight:

Another room that I went into had, like the other parts of the museum, a miscellaneous collection of stuff. Around the walls, as well as a couple of displays dedicated to a couple of military personal that assisted in setting the museum up, were also a number of items that the troops would be issued with, such as rations:

and a collection of booklets that were handed out to the troops:

This room also contained memorabilia from the Gulf War, a collection of hats, some uniforms, and even some rifles (okay, one rifle that was used in the trenches of World War I). However, what really caught my attention, namely because it was a little out of place in this room, were all of the engines.

Along with this room, they also have the workshop where they are working on restoring some other military vehicles, as well as a display dedicated to the medical corps and World War I. Along with that there are a number of paintings, no doubt by some artist that was once in the army and has also provided some assistance with the museum. Otherwise he was probably like my Grandfather in that he enjoyed painting, but the art critics of the modern world had felt that his art work was, well, normal, so instead he gave the paintings to this museum. Hey, at least people get to look at his artwork. 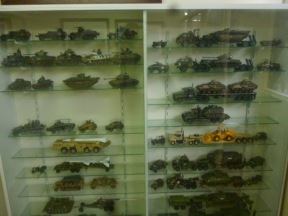 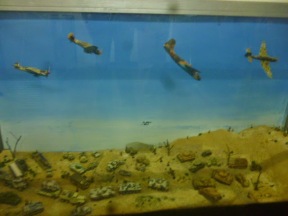 Mind you, there are plenty of models in my Dad’s shed to check out as well.
So, that’s the museum. It probably isn’t everybody’s cup of tea, and it is a little out of the way, but it was interesting nonetheless. So, I guess I will finish off with a picture of an American mobile rocket launcher.

National Military Museum – Bring on the big guns by David Sarkies is licensed under a Creative Commons Attribution-NonCommercial-ShareAlike 4.0 International License. All images on this post are © and/or ™ their relevant owners. If you are the owner of any of the images used on this website and wish them to be removed then please contact me.