Okay, it’s not quite the MCG, and they don’t play any AFL games here, but this is still the traditional home of the Port Adelaide Football Club. When I was in primary school (the dates which I will not be disclosing) there were only two SANFL (South Australian National Football League – though I don’t know where the word ‘national’ came from since it is a state based league) teams that were any good, Port Adelaide and Glenelg. Okay, I grew up in the Central Districts (and if you are baffled by the names just click on the SANFL link and that, hopefully, will explain everything, and if you don’t know anything about Australian football, well there is always Wikipedia) but they were always on the bottom of the ladder (but that has since changed) and in primary school you didn’t want to support a team at the bottom of the ladder, so I decided to go for the Port Adelaide Magpies since they were always on the top of the ladder and always won grand finals.

Mind you, I never actually watched a game of football and had no idea of the rules, and my Mum, who has been a long time Carlton supporter, laughed when I told her I went for Port Adelaide because she knew that I knew absolutely nothing about the game (and she proved that by asking me who played for them and I couldn’t give her one name). Anyway, my token support continued through my life, and when rumours began to circulate that Port Adelaide was going to be the second South Australian team to enter the AFL, I was right behind it. However, it was still going to be a number of years before I actually started watching matches.
I can still remember the first Port Power game I watched. It was Sunday, 29th July 2001 and I was at my friend’s house not doing all that much when we decided to watch a bit of television and the only thing of interest was the football. So we watched the game between Port Adelaide and Essendon and suddenly Port Adelaide began to kick all these goals (though they ended up only winning by 7 points). That brought a real smile to my face because one of my good friends used to follow the Adelaide Crows but had suddenly switched teams because of a girl (which is not really true, but it makes a good story) and when I went home the first thing he said was ‘I don’t want to talk about it’. Anyway, after that Sunday afternoon I was hooked, and while I don’t watch every game on television (though there have been times that I have) I have learnt a lot more about this particular brand of football.
https://youtube.googleapis.com/v/aVAj-I1Zx2g&source=uds
Anyway, when I returned to Adelaide for Christmas I realised that one of the things that I have never done is visit Alberton Oval, the home of both Port Adelaide football clubs; so I decided to rectify that situation. Mind you, I simply expected there to be a football oval with some stands and not much else, and after catching the train with my friend, we alighted at Cheltenham Railway Station and took the short walk to the oval.

So, we arrived at the oval and I took a few photos and then went for a walk to the others ide to see if we could get out (yes, you can actually walk across the oval, which is something you can’t do at the MCG, or even at AAMI Stadium where the Crows are based). While doing that I decided to check in on Facebook, and as a response one of my friends (who happens to support the Crows) immediately replied with ‘dislike’ (and you wonder why I don’t like Adelaide). Anyway, discovering the way out I called my friend over and turned around to see ‘The Port Club’, and also noticed that it was open, so I went inside and discovered that it was a fully functioning bar.

So, after buying a beer (but you would have known that if you read the caption on the above photo) we wondered around the club, noticing that not only is it a fully fledged restaurant, but also has numerous memorabilia on the walls. These include guernseys from former players, a hall of fame (which only includes players from the Magpies – the Power does not seem to be represented) as well as a number of glass cases which contains all of their trophies and medals. Along with that there is also a store which sells all manner of Port Adelaide items, and if you wish to become a member, well, you can do that here as well. Okay, it is a little out of the way, and it was pretty quiet when I was here, but it was certainly worth the trip. Oh, when I got home and told my Dad where I had been, he just smiled and said that he and my sister had got tickets for a proper tour (though from what it appears these were special tickets that were not available to just anybody, but then Travis Boak does take us on a tour of the facilities on Youtube, though it appears to be promoting solar energy). 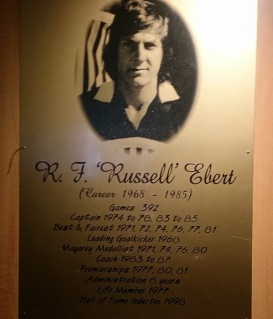