I could probably start by suggesting that during the day the Queen Victoria Markets are like any other farmers market but in a why it isn’t because it has a character all of its own. However, I can’t really say too much about it just yet because I have not given myself the opportunity to actually spend a decent amount of time here to really get a feel for the vibe, so I will leave it at that.
Anyway, during summer every Wednesday night the Vic Markets suddenly turn into a smorgasboard of edible delights from all parts of the world. This is the Night Market, and it is not simply a massive collection of food stalls that leave you wondering what it is you are going to eat because even though you may see something that catches your eye, there are more stalls ahead of you that drag you away from the last one, but also the atmosphere of people wandering around the stalls, and the live bands, that makes this event one that I have found hard to resist from returning.
My first taste of the Night Markets was back in early 2013 when my then home group from St Judes Parkville decided to have a bit of a catch up during the summer break: this is where they came. All I can say was that I was suitably impressed, and we were even lucky enough to find ourselves a table (you have to be really, really quick – the last couple of times I came I ended up finding myself a comfortable retaining wall to sit on and have my meal).
As I suggested the variety available can literally make you head hurt, whether you want some coconut juice: 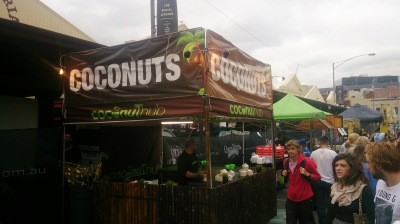 A good American meal at the Dukes of Barbecue: 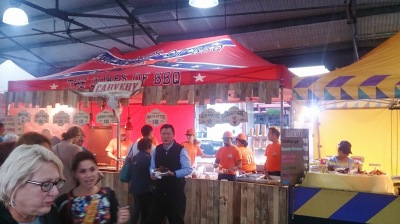 Or simply a slice of some Fantastic Fudge: 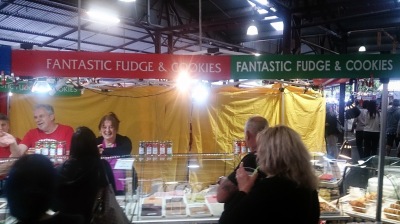 Well, I ended up passing on that, probably because I am not a big fan of fudge and cookies, but also because what really caught my attention was the Korean Twist Potatoes.

Along with the fried peaches:

Which I washed down with a nice glass of Little Creatures Pale Ale while sitting on my retaining wall listening to one of the bands.
By the way, did I mention that the Night Markets gets really crowded? If you don’t believe me, have a look at this:

Anyway, the Night Markets are more than just food (though by looking at all of the stands you wouldn’t know it) because there are also quite a few bric-a-brac stalls. Many of them are probably staying open as during the day this area is basically chock full of stalls selling such oddities. While you can find almost anything during the day (and I do emphasis almost because there are a lot of things you can’t find – such as knock off Nikes – you have to go to China for them), there are some interesting, and cheap, things that you can find here at night, such as clothes: 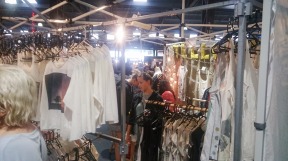 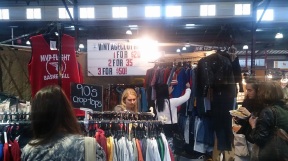 Aprons bearing smart comments that are generally found around the neck of a male standing in front of a barbeque (which is generally the only time you will find them with a cooking implement in their hands):

And of course, the ubiquitous stall that sells really cool T-shirts:

In fact, despite the my drawer bulging with T-shirts, I simply could not resist coming back the next week to purchase one – this one: