Okay, when I came down to Adelaide in early March it was my intention to spend some time at the Fringe Festival, but as is typical for me I also had quite a few other plans as well, such as coming down to Port Adelaide with my brother and another friend and visiting a couple of museums. Since my brother loves trains this was going to be one of those museums that we had to visit.
Well, I must admit that my brother’s love of trains has rubbed off on me a bit, which is why I have a Youtube channel that is made up entirely (or almost entirely) of videos of trains, however you won’t be seeing any modern trains in this museum, such as this one:
This is the Indian Pacific that travels from Sydney to Perth
or this one:
Yes, I know, this is a Melbourne train
In fact, despite it being called the National Railway Museum, the only trains that you will find here are the trains that were used by the old South Australian Railways (SAR) department.
Anyway, here is a map to show you where you can find the museum.
The museum is made up of three pavilions and also has a miniature train that circumnavigates the museum twice. Okay, it may not be as exciting as some of the rides that you get a Dream World, and it is a little tight, but at least it keeps with the tradition of the museum. Fortunately there are a number of proper sized tourist railways scattered about Australia, such as the famous Puffing Billy in Melbourne, the Pichi-Richi Railway up in Port Augusta, or if you are looking for something a little closer to Adelaide then there is always the Steam Ranger.
Talking about tourist railways, which generally always use steam engines, the Museum has quite a number of restored steam trains on display. 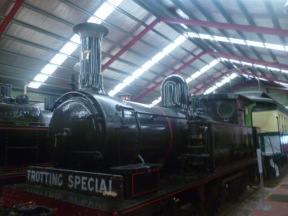 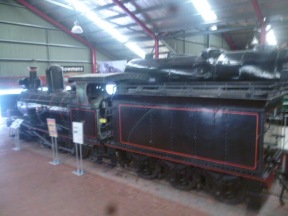 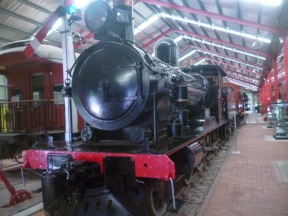 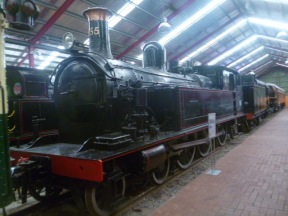 There are quite a lot of trains squeezed into the three pavilions, which is always the difficult thing with museums, especially those in the city – they have so many exhibits but not enough place to put them all. Many of the engines are closed off (though you can climb in some of the engines in the Fluck pavilion), however you can walk through a number of the carriages. Aside from the main pavilion there is also the Goods Pavilion where they are restoring some trains (and there are a couple of other sheds where there is also some restoration work in progress but you don’t have access to them). The other pavilion is the aforementioned Fluck pavilion, which for some reason everytime I saw a sign pointing to it I would somehow not see the ‘L’.

One of the main attractions in the main pavilion are some carriages from the Tea & Sugar train (and while the wikipedia entry is quite brief, it does link to some external sites that offer a lot more information). I had grown up hearing about this famous train because it was described as a ‘shopping mall on wheels’ (actually, that is my own creation, but you get the picture). The train would travel from Port Augusta to Karlgoolie and would service the railway workers working on the trans-Australian railway line. The train had its own butcher, grocery store, and even a bank (which would also service the workers payroll).
The trans-Australian railway is said to be the longest, straightest railway in the world, and while the actual railway begins in Sydney and ends in Perth, it was the stretch along the endless desert known as the Nullabour Plains that the train would travel, namely because there were numerous villages where the railway workers would live, whose job was to maintain the railway, and also because that was the most remote section of the line. However, the train made its last journey in 1996, namely because technology (in the form of concrete sleepers) meant that having permanent workers living in the middle of the desert was no longer required.
Anyway, a rail museum wouldn’t be a rail museum without a model train set, so here it is:
Mine was never as good as this one
As I mentioned, you could also walk through a number of the carriages that they had restored, especially the ones from a bygone era when my grandfather was a child. This was back in the days before civilian airtravel and when only the rich had cars. Even then many of these cars were not designed for long distance journeys so one would have to rely upon train travel if one wanted to go interstate. Here is one of the dinning and lounge cars that we wondered through: 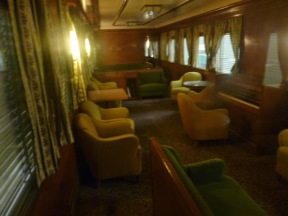 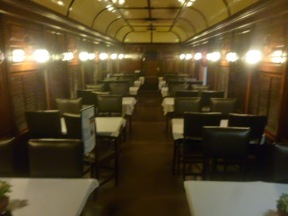 Us plebs would have been relegated to the back
Of course they had a number of displays, including a room containing information about the signal boxes and the train control rooms, and another display looking at the role of women on the railways (though many of them wouldn’t have been out in the field fixing the tracks). Along one of the walls of the main pavilion there were also a number of objects made out of scraps from the old trains, turning them into what I would call mech-art. 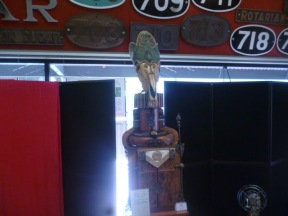 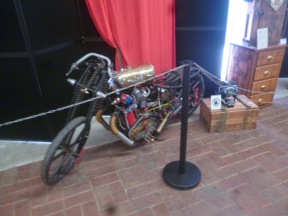 At least they are in a museum, unlike many of my weird and wonderful creations
They even had some relics from the Adelaide railway station, such as the old concourse clock:
and the old departure signboard:
For some reason I could actually remember this signboard from when I was really young. Okay, a couple of much older people walked past and suggested that I was too young to remember that sign, which does suggest that I have held my age really well.
Anyway, it was really interesting studying this sign because as well has having all of the metropolitan trains listed, there were also quite a few regional destinations. This suggested that the old railway system ran passenger services right out to the country. On some of the services you would have to catch the train all the way out to, say, Gawler, and the change trains, most likely due to a different gauge.
Due to the development of passenger transport, and declining passenger numbers, pretty much all of these regional services have since been cancelled. These days there are only three passenger interstate trains departing Adelaide: the Indian Pacific which runs from Sydney to Perth, the Ghan which runs from Adelaide to Darwin, and the Overland which runs from Adelaide to Melbourne. Oh, speaking of the Overland, there are a number of restored carriages in the main pavilion from the older train, and I even remember travelling on some of them as a kid when my Dad would take me to Melbourne to see my grandparents.
I have always been hoping to see the restoration of some of these country services however I doubt I will see them resurrected in my lifetime (if ever). However, I should mention that they had a couple of carriages from these old country services in the museum, especially the Centenary Carriage 376, which I can still vaguely remember travelling in when I was a kid, or at least when I stepped inside the carriage I suffered a sudden attack of deja-vu. 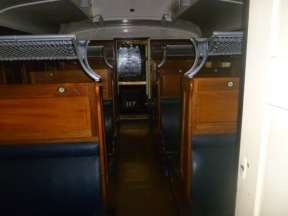 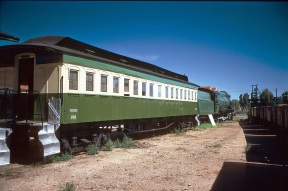 Mayhaps the deja-vu comes from seeing these in a museum
It was also interesting seeing a display on the various gauges (which consist of narrow, standard, and broad). The problem in Australia was that there was no standardised gauge. The Adelaide metro system was broad gauge (as was most of South Australia) while the national gauge was the narrower standard gauge. There was even a time when you were travelling by train to Melbourne where you would have to change trains at the border due to differing gauges.
It was also interesting looking at the pictures of the multi-guage (or should I say dual gauge) tracks which allow trains of differing gauges to travel on the same track. Mind you it was all very confusing, but here is a picture of a dual gauge track in Switzerland.
I’ll finish off here, especially since I visited two other museums while I was in Adelaide, as well as a couple of other places, but before I go, here is a video taken from the miniature train as it travels around the museum twice.
And I managed to do it without getting my friend on camera
Oh, and if you are really into trains, you can always visit Johnny’s pages.