I’m going to have to say that this is my home church whenever I go to Brisbane. Okay, I don’t go to Brisbane all that often, but whenever I do (a grand total of four times) I have always paid this church a visit and my experience has always been the same, which is probably why I keep on coming back (to this church, not Brisbane – the last time I was in Brisbane was back in 2008). Anyway, I first heard about St Andrew’s South Brisbane through a friend from a church that I regularly attended in Adelaide, which was generally how you would find out about churches back in the day, simply because you never knew what you were going to get when you walk in through the door (and I have walked into some absolute shockers). Actually, I don’t mind wandering into random churches because, depending on the church, you can have some very interesting experiences, but I must say that every time I have come here the experience has always been wonderful. 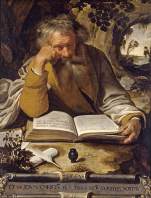 The funny thing is that I have discovered is that there are a few churches named after Andrew the Apostle, including this one (and the Sydney Cathedral is named after him, as well the churches that I attend in Reservoir), which sort of baffled me because it is not as if he is one of the ‘super apostles’. In fact I don’t think he gets all that much air time in the Bible, beyond being mentioned as the brother of Simon Peter (in Matthew and Mark) and being one of John the Baptist’s disciples in the Gospel of John. However, according the Wikipedia (the fountain of all knowledge in the age of the internet) it is suggested that he became the apostle to the Scythians (at least according to Eusebius – if you actually trust what he says, which I don’t) and travelled north along the coast of the Black Sea to modern day Ukraine. I guess that is why he is a patron saint of the region. Also, the picture of him on Wikipedia is also pretty cool (and it’s public domain to boot).

St Andrews is what some would call an Evangelical Anglican Church and is located in the suburb of South Brisbane. Basically it is one of those churches that if you consider yourself an evangelical protestant you can pretty much be guaranteed that you will get a sermon preached that is faithful to the teachings of Christ Jesus. Okay, like many evangelical churches they teach things that can be hard to swallow at times, and speak against a number of issues that is contrary to our society’s beliefs, but then if that is not the type of church that you are looking for then I’m sure there are plenty of others out there that will give you one of those happy, feel good sermons and are little more than giving you a pat on the back and telling you that you are doing fine. As for me, if I wanted something like that I would go to a motivational talk, but then again you generally have to pay for such talks. However St Andrew’s will stick to the teachings of Jesus, even if some of those teachings are hard to swallow.

I probably should give you an idea of where the church is located, so here is a map:

I remember when I first walked into this church years ago on my first trip to Brisbane with my brother (we actually drove there from Adelaide along the coast – it took us a week) we were immediately made to feel at home. In fact when we mentioned that we had come from Adelaide we discovered that an old friend of ours was regularly attending. Okay, the congregation wasn’t all that large, but I have always enjoyed coming to churches with smaller congregations because as a newcomer, or a visitor, you are immediately noticed and made to feel all the more welcome. In some of the larger churches it can be easy to get lost in the crowd (not that that has ever bothered my brother who has never had a problem making friends at a new church).

St Andrews has two main services, one at 10:30 am and another at 7 pm. The 10:30 am one is a family orientated one, while the 7pm tends to be for a younger audience. Actually, a quick glance over their website indicates that they have a number of other services as well, though the leaflet that they handed me at the door indicated that the 10:30 am and the 7pm are the two major ones. They also have Bible studies during the week, as well a regular events throughout the year. Oh, I should also mention that they also support a number of missionaries in various places around the world (but then that is generally a given with most churches).

Anyway, I want to finish off with a lovely anecdote that I found in the leaflet (in fact you can find quite a lot about a church from their leaflet, though in the age of the internet you can also find out about a lot of these things by going to their website – in fact one of the churches I regularly attend no longer hand out leaflets at the gate):

St Andrews South Brisbane – A Friendly Queensland Church by David Sarkies is licensed under a Creative Commons Attribution-NonCommercial-ShareAlike 4.0 International License.If you wish to use this work commercially please feel free to contact me.