I’m not really sure why it is I feel that I should write a post on Paddington since I haven’t wandered around here a huge number of times, but then a part of me is determined to have a beer at least at one of each of the pubs that I have found around here (though I haven’t managed that to date, namely because I get to a point where I simply say that I have had enough, jump on a bus, and head back to my hotel). Well, at least I have had a drink at the Unicorn, since when I last walked past it had closed down. I still have in my mind the point that I have reached so that I can then continue on that trek the next time I find myself in Sydney (though I have to continue my Balmain and Surrey Hills trek as well, though despite having spent a bit of time wandering Surrey Hills, I don’t seem to have got around to writing a post – maybe because I didn’t take a huge number of photos, but then again I didn’t take a huge number of photos of Paddington either).

I’m not really all that sure why I really want to check out all of the pubs in Paddington since, with the exception of the Woolhara Hotel, none of the others that I have visited have been all that impressive (and I have visited a few, including a number in the back streets). Anyway, my adventure began upon emerging from Trumper Park (yep, this adventure begins on the tail of my adventure in Double Bay), where I immediately made my way to the Four in Hand hotel. Despite it being located in the back streets of Paddington, surrounded by houses, it still seemed to be pretty crowded in the early afternoon in the middle of the week. Either the patrons weren’t working (and considering their age how do they afford to live in Paddington – but then again as the saying goes, Sydney is a very expensive place to live, which basically means that they can’t afford to live in Paddington, but they do anyway).

Okay, Paddington is an incredibly expensive place to live, particularly since it is located within Sydney’s Inner Ring (which is defined as being within 10 kms of the city centre). However that doesn’t mean that this is full of old money. As I mentioned in my post on Bondi this used to be a working class district, and you can generally tell by the rows of terrace houses crowding the streets. Sure, these days these terrace houses look lovely, and attract an handsome price, but the thing is that they are small, and in some cases identical. The reason for this is that they were cheap, and close to the city.

Obviously this has changed quite a lot, especially with the influx of younger workers over the last decade or so deciding that they wanted to live closer to the city. The days of moving into the outer suburbs to raise a family (and to build a big house) are actually long gone. People no longer want to spend a chunk of their day either sitting in a car, or sitting on a train, communiting to work. In fact our cities have sprawled to a point that people could end up spending somewhere between three and four hours on the daily commute (I spend two hours, but then again I do live in Epping). This it turn has made innercity living really attractive, which has worked to push up the house prices (as well as other market distorting government policies such as negative gearing and capital gains tax concessions).

Anyway before I continue, here is a map of my trek that afternoon.

So, after paying a visit to the Four In Hand I made my way through the back streets to another lovely English style pub known as the Lord Dudley. Once again, my quest in visiting as many pubs as possible (if only to mark them down as having been there, but the again since it took a group 32 years to visit every pub in Melbourne, or at least every pub listed in the Yellow Pages at the time the crawl began, I doubt I’m going to be able to visit every pub, though it isn’t stopping some people from trying).

So, I had a drink at the Lord Dudley, and then walked across the road to a pretty ordinary coffee shop called ‘The Flat White‘. Okay, maybe the ordinary part of it had something to do with it being packed, but then again considering some places that I’ve been to, this place was pretty bland. Mind you, since I can’t really drink huge amounts of milk any more (let along hot milk), I ended up settling for a cup of tea (though I wonder what I’m going to do when I get to Paris – I don’t think they drink tea in Paris).

Well, that was an okay pitstop, but I then headed back into the back streets to where I found my next stop, a fairly classy (or as Google says chic) pub called the Bellevue. I have to admit that chic really isn’t my thing. Hip, trendy, maybe, but certainly my chic. Mind you, I would hardly consider myself hip or trendy since I’m clean shaven, and generally have my own style. Okay, I have followed trends in the past (such as the long coat, which was a fad for a while), but these days with tattoos, multiple earrings in any place that you could have a piercing, and of course those Ned Kelly beards, I simply going to say that I would rather be myself. 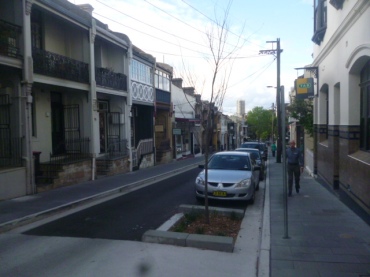 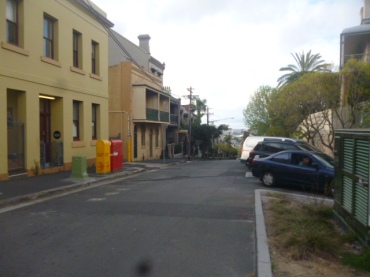 The next leg of my journey found me in the Woollahra Village (which while being it’s own suburb, I still pretty much consider to be part of Paddington) and around the corner from what is probably, so far, my favourite pub in the area – the Woollahra Hotal. Okay, the main reason is because it has this really, really cool beer garden on the roof, a beer garden that I almost completely missed the first time I ventured though here. It was only that I decided to have a look upstairs that I found it. Anyway, this time around I knew all about it, so I grabbed a beer (and I have to say that the bartender was really friendly as well), went upstairs, and read some more of my book

So, after a nice cool beer up in their beer garden (which was actually pretty quiet, though it probably had something to do with it being in the afternoon on a weekday), I then continued my trek through the Woollahra Village (though for some reason I wasn’t taking any photos, but then again these days it seems with the advent of the digital camera one could end up taking photos of every step that they take, but then considering the number of photos on Google Maps, it seems as if people do just that). However, one thing that I did notice was that some of the residents seemed to do a little gardening out on the nature strip, and created what I could consider street gardens.

As I continued down the road I found myself at what could be considered a major intersection – the intersection of Oxford Street and Moore Park Road. Here you will find the fountain that I used as the cover picture for this post. Also it seems that most of the traffic will turn from Oxford Street onto Moore Park Road, as in the direction of the city Oxford Street becomes more of a shopping strip (and after Taylor Square you hit the LGBT community). You will also find St Matthias at the corner here, which I have already written a post on, however here is a photo of the church anyway.

Mind you, I didn’t head straight down Oxford Street at this stage, but rather headed back towards Bondi Junction as there was another pub that I wanted to check out – the Centennial. However, when I stepped inside I discovered that it was more of a really, really classy restaurant as opposed to a pub. However, despite its appearances, the staff still treated me rather well, despite the fact that I wasn’t actually dressed in a really classy manner (I was wearing T-shirt and jeans, which is my standard dress when I’m not at work). Okay, while this pub isn’t exactly my scene, it was the welcoming that I received from the bartender that did leave an impression in my head.

After finishing off my drink I decided to head back down Oxford Street. Now the thing with Oxford Street is that it has always given me the impression that it is the centre of the Australian LGBT community, however that section of Oxford Street is actually really small – between Hyde Park and Taylor’s Square – the rest of Oxford Street (up to Moore Park Road that is) is actually just your standard inner city shopping strip with a number of restaurants and bars along its length. Mind you, I’m not really all that impressed with the bars along this stretch of the road, though I can’t say that I have actually visited all of them yet. Maybe it has something to do with the lack of a beer garden, or just that they are either too classy, or just plain boring.

As I was making my way back towards the city I did take a detour into the back streets for a bit, namely because there were a couple of pubs there that I wanted to visit again, despite the fact that they really didn’t appeal to me all that much (and anyway I wanted to step in there for one final time so I could at least have a more recent experience for my True Local and Yelp reviews). Once again these inner city back streets with their terrace houses really does have a lot of charm and I could easily wander around these streets for ages simply taking in the rustic beauty of the original city.

Oh. there was also something else that I discovered as I was wandering through the backstreets, and that was this little alley that I referred to as ‘The Garden Alley’. Actually, I believe that it is an entrance to either a gallery or a cafe of some sort, but I still thought it was pretty cool. 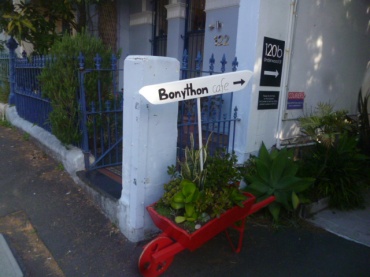 Anyway, it was time for me to head back into the city (namely because I was starting to get a bit tired and wanted a quick lie down before I went and saw a play later that night – Bernard Shaw’s Arms and the Man). However, before I finish off I should also mention that like many of the inner city suburbs, you still have a lot of the old public buildings (as well as the shops) along here, including the post office and the police station. There was even this really cool fountain in one of the squares. However, as I have mentioned, it was time to head back to the hotel, but I suspect that I will return to Paddington to continue (or even complete) my journey. 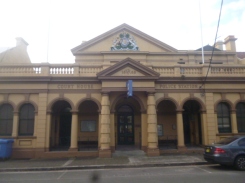 Paddington – The Inner East by David Alfred Sarkies is licensed under a Creative Commons Attribution-NonCommercial-ShareAlike 4.0 International License. If you wish to use this work commercially please feel free to contact me.