I should start of by querying whether being at a place for a layover actually counts as visiting a place – if that is the case then I’ve been to Singapore six times and Hong Kong four. However, if visiting a place involves passing through customs and having your passport stamped (though that is starting to become a thing of the past with the electronic systems being set up around the world) then once again I have been to Hong Kong four times and Singapore three (in Hong Kong you have to pass through passport control even if you are only changing flights at the airport). If it involves stepping out of the airport and wandering around the city, well, Hong Kong is three (or even twice because the third time was leaving the airport, catching a cab to the hotel that happened to be just around the corner, and then catching a plane out the next day) and Singapore three. Mind you, on my first trip to Europe we flew over Afghanistan, so I raised the question of whether flying over a country at thirty thousand feet also constitutes a visiting a country, though the general consensus is no.

The reason that I am making these comparisons is because it turns out that I have been to Singpore more often than I have been to Hong Kong, which I tend to prefer much more than the jewel of the Malaccas. One of the reasons was because when we first went to Europe our flights passed through the city-state, and since we were stuck in the airport for about twelve hours on the way back (or was it more), my brother insisted on heading out into the city to have a look around. The problem was that I was exhausted, but my brother can be rather persuasive at times. However, we took one of the free tours that the airport offers, and all I can remember is some tourguide making jokes, some really tall buildings, and Raffles hotel – the rest of the time it was basically a blur (and once we got back to the airport I jumped into one of the transit hotels and promptly went to sleep).

Fast forward another couple of years (four to be precise) and I was sitting at home, twiddling my thumbs, wondering where I should go on one of my adventures, and the decision was to head to Phuket via Singapore. Now, I had been having a chat with my cousin, who happens to live in Hong Kong, and he was telling me how when he was given an opportunity to move overseas he had the option of either going to Hong Kong or Singapore. In his mind Singapore was, well, rather bland and boring, while Hong Kong was an exciting city with a roaring nightlife. Mind you, Singapore does have a reputation for being incredibly clean, and for even banning the importation of chewing gum, but whether it was a boring city was something that I was going to test out. Sure, Hong Kong does come across as being a lot more exciting, but one of the reasons I have this passion for Hong Kong has more to do with my love of Hong Kong action movies (especially from the classic days of Hong King cinema) than anything else.

So, that was when that I discovered that there is actually more to Singapore than a pretty large airport, tall buildings, and a ban on chewing gum. The thing is that yes, Singapore is pretty clean, and yes, the people are incredibly postilllite, but it didn’t come across anywhere near as boring as I originally anticipated (or had been told). Sure, the places that Singapore boasts are places such as the Botanic Gardens with the Orchards, and the Super Trees, but we can’t forgot that there is something else that people do when they come to Singapore: eat.

As The Sun Sets

The question still arises as to whether there is actually a decent nightlife in Singapore. The first thing I should suggest is that while Singapore is heavily westernised, it is still very much an Asian country, so you are going to find that the nightlife tends to be more Sino and Malay focused than you would find elsewhere. I discovered that when I was last in Hong Kong – a nightclub in Hong Kong is nothing like a night club in Melbourne. While the name may be similar, what actually goes on inside is completely different. However, Singapore does have its fair share of bars, which tend to be found around the city centre, namely because that is where all of the tourists tend to hang out.

The interesting thing was that as I stepped into a bar in the CBD, I discovered that they had the AFL (Australian football) on the television – no doubt a lot of Australians pass through here so we need to cater to them. Mind you, there wasn’t anywhere near as heavy a presence as there was in Phuket (and I suspect that you will get the same in Bali, not that I plan on going to Bali anytime soon). However, as the sun was starting to set I decided to head back to my hotel, which was basically further up the Singapore River at Robertsons’ Quay, so a nice wander along the river was certainly in order.

As I wandered along the route I discovered Boat Quay, which is the first stretch of road (or more so a pedestrian walkway) along the river, and it is generally full of restaurants, though there are a few bars scattered around about, such as the Purple Turtle and Skinny’s Lounge. However, no doubt the part of the area facing the river has the highest price for real estate, so to discover some of the truly interesting bar, such as Draft and Craft, and the Mad Men Attic Bar, you need to wander down into the back streets (though it took me a couple of trips to Singapore to actually discover Mad Men).

Anway, I then passed under New Bridge Road and found myself in another place that I had heard about in passing (namely due to there being a subway station nearby) but had never really thought all that much about – Clarke Quay. The thing was that that first trip along the river as I was heading back to my hotel made me realise that there indeed was a lot more to Singapore than met the eye, and Clarke Quay, with its bungey pole, and thumping music, was certainly where it all happened in the days after the sun disappeared beyond the horizon.

Where It All Happens

Well, I’m not sure if you can call Clarke Quay an entertainment district, but I guess it comes pretty close. That first time in Singapore I simply wandered past, making my way back to the hotel, and didn’t get around to returning here the next day (and the day after I was heading off to Thailand). However, this second time in Singapore I did get the opportunity to have a look around, and in fact came here a couple of time, one time after church, and after my brother had decided he wanted to stay back at the hotel and play on the computer, and the second time when it was daylight, and we were killing time waiting for our midnight plane to take us to Frankfurt.

So, there are two parts to Clarke Quay, which sort of corresponds to the two sides of the river. On the southern side it is basically a shopping centre, which pretty much dies down after the shops close. Well, there are still some restaurants and bars facing the river (though being Singapore the restaurants tend to outnumber the bars, though I am still quite baffled as to why people aren’t as large as other places that tend to love their food), but south side of the river is generally a shopping district. It is also where the MTR drops off, or at least it is the closet station to where you need to go.

However, it is the north side of the river where everything seems to happen, and where most of the loud music and flashing lights strobe out to summon the young and old for a night of revelry. Okay, they also have restaurants, but there are  a decent number of bars, and even nightclubs, here (though nothing beats a nightclub that happens to be at the top of Singapore’s tallest building, not that I’ve been up there yet, but I might try sneaking up there sometime in the future). Yet, it is clear when you wander into the pedestrian areas that this place is designed for people to be out and about – in fact the huge coverings over the area (which is something that you do see around the place in Singapore due to the propensity for it to rain) clearly indicate that it is designed for this.

As I mentioned, there are a number of bars around here, and while I could suggest that I visited all of them, I will have to be honest and admit that I didn’t. For instance, there is the Attica Bar, which seems to be only open late at night, but then again it is a nightclub. You also have MacGettigans, which is an Irish pub, and the Pump Bar, where one of the waiters attempted to load me up with more beer than I actually wanted. In fact it is one of those bizarre things that I encounter – if we are trying to discourage people from drinking too much, why is it that we have happy hours. I guess it similar to pubs in Australia getting gambler’s to ‘self regulate’ their gambling habits. Seriously, if self regulation worked, we wouldn’t need police. 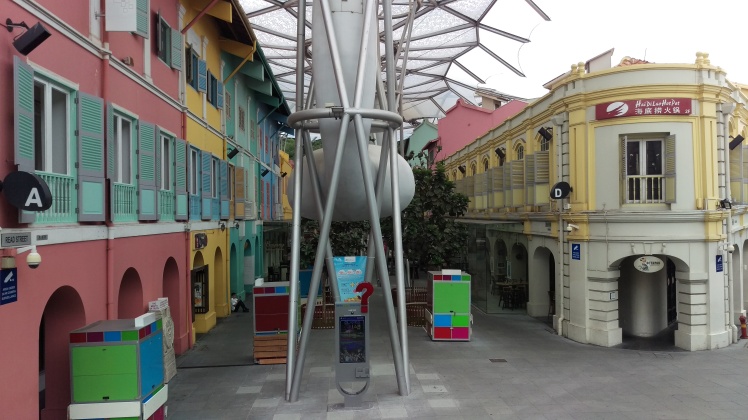 There were a few other bars that I visited as well, including Harrys and the Bunge Bar (named because of the huge bungie pole sitting next to it, or is it a sling shot, I’m not really quite sure). However the one that stood out for being unique was the Beer Market. The reason for it being unique is because the prices of the beers change based upon how popular they are. So, a popular beer is going to go up in price, so if you are only there to drink cheap beer, you will then move onto another beer, and as that popularity goes up, so does the price. However, the one problem is that you can’t buy a beer when it is cheap and then sell it back when it is expensive – unfortunately it isn’t that sort of market.

So, there we have it, a taste of Singapore’s night life. Mind you, like most places, it is difficult to nail good night spots to one particular place, though bars do tend to appear in places where lots of people congregate at night (and the government lets you). As for Singapore, while Clarke Quay does have some character about it, it isn’t the only place where you can enjoy a good night out – there are a number of places, with Chinatown, and the aforementioned Boat Quay, being a couple of them. As for which city is better, well it is hard to say, though I am going to have to say Hong Kong, even if it is because of Jackie Chan. 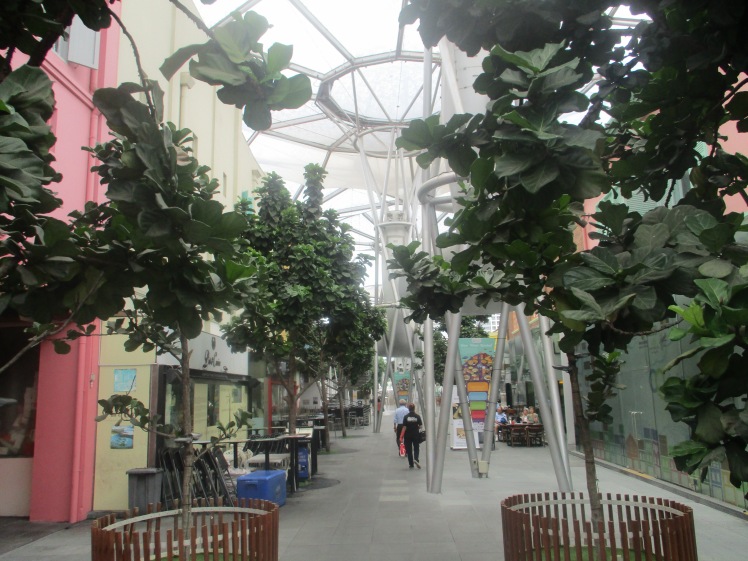 Clarke Quay – Experience the Nightlife by David Alfred Sarkies is licensed under a Creative Commons Attribution-NonCommercial-ShareAlike 4.0 International License. If you wish to use this work commercially please feel free to contact me.

One thought on “Clarke Quay – Experience the Nightlife”