So, after spending a couple of days in Newcastle (that is Newcastle Australia) it was time to continue my trek north. By this time I had pretty much reached to edge of the Sydney Rail network – to an extent, so it was now time to jump onto the Countrylink to continue my journey. The problem with the Countrylink is that there are only two that pass through here on a daily basis, which means that I had to make sure I was at the station otherwise I would be waiting around for quite a while with absolutely nothing to do, and nowhere to stay. Also, my bag had decided to stop being friendly which meant that attempting to get it to the railway station was going to be an absolute chore. Also, I should also mention that bookings are essential.

Well, fortunately there was a bus that stopped right outside of my hotel and would take me down to the station, so that was one problem solved, though my bag was still going to be an incredible pain. Also, the journey was going to take something like four hours, and these Australian trains aren’t the most comfortable to sit on. Still, at least I had most of the seat to myself, and the kiosk was a short walk away from where I was sitting, and further, I hadn’t actually caught the countrylink up this way before, so it was going to be a bit of an adventure.

What I noticed is that the train pretty much stops at every town along the route, but that is basically the purpose of the train, to connect these outlying towns. Mind you, with the advent of the car, the need for people to catch trains has diminished somewhat, and further, catching the train just to go into the city for a day is really not the most convenient of exercises, particularly since you pretty much can’t catch the train for a day trip – you will most likely have to spend the night, or at least get up ridiculously early. This particular train left Sydney around 8:00 am, and reached Newcastle at 10:00, and I wasn’t going to get to Coffs Harbour until about 3:30pm (okay, it sounds as if I was being rather generous when I said it would only take me four hours). Though, looking back on the journey I did notice that I skipped a large part of the coast on my trek north, but then again I really was pressed for time.

So, about 3:30 I arrived at Coffs Harbour, jumped off the train, and made my way up the hill, which was incredibly painful on account of my bag – yeah, the problem was that the wheels had stopped turning, so I was basically dragging it everywhere. This was rather annoying since I had bought a similar bad just before heading off to Hong Kong, and that lasted me for years – in fact I was able to take it all over Europe without a problem, and it was only recently that that faithful bag has started to die. Well, I decided that since the last one worked so well, then maybe the same brand would do me well. Okay, it turned out that it didn’t, much to my disappointment.

Well, let us move on from my disappointments with the bag to my experience at the pub. The first thing I noticed was that the front bar was actually packed to the brim full of people. This was surprising, with it being a Wednesday and all that. Well, as it turned out it happened to be lingerie night, or should I say afternoon. That means that there are a couple of young ladies in the pub wearing nothing but lingerie. Okay, I should mention that if you give them tips they might be persuaded to remove a part of that lingerie, but being me all I wanted to do was dump my bags and go for a wander. So, I made my way through the maddening crowd and quickly found myself in what turned out to be a rather nice room. Oh, I should mention that the two young ladies also had rooms here as well, and I suspect that they are flown in from Sydney (or Brisbane) for the night, and are sent home in the morning.

The train station is actually located near the beach, but this actually isn’t the main centre of Coffs Harbour – that is a fifteen minute walk up the hill. I suspect they did that due to the possibility for some rather ferocious storms that come in off the Pacific Ocean. However, that doesn’t mean that there is nothing around here – by no means. There is a small shopping strip (and no ATMs) with a bar, the pub, and a couple of cafes, as well as some restaurants. That was fortunate, particularly since I had a craving for some vindaloo, and sure enough I found an Indian restaurant here that would serve my needs rather well. Oh, and the bar was also rather nice, as were the cafes, which I managed to visit in the morning, if only to grab a bite to eat. 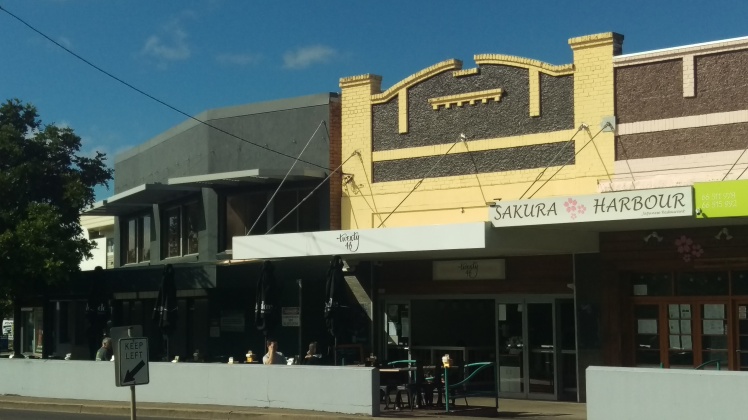 While I didn’t explore this whole area until the third day (namely because I was waiting for the train to arrive, which would be around 3:30), just to be consistent I’ll continue my discourse before heading further up the hill. Anyway, around this area is the beach, as I mentioned, but it is a rather interesting beach. I won’t call it a bay, namely because it isn’t a bay, but rather a harbour. Opposite the beach is this large island called Mutton Bird Island. Basically they have built a breakwater between the shore and the island, even if it is just to provide a harbour for the yacht club, and the fishing boats. Yet, it also provides a rather sheltered and calm place for a swim, though if you are like me and prefer slightly rougher waves, then you can always go onto the other side of the breakfwater.

The breakwater actually allows you to walk out to the island, which turns out to be a pretty good time waster. If you are lucky you might even get to see a muttonbird, though I should point out that before this place was turned into a nature reserve, people literally went tromping all over the island ruining their habitat. However, a path has now been laid across the island to where there happens to be a platform – for whale watching. If you are lucky, and are there are the right time of year, you might even manage to see a whale – I believe that I did, even if it was only the sprout of water that shoots up into the sky. 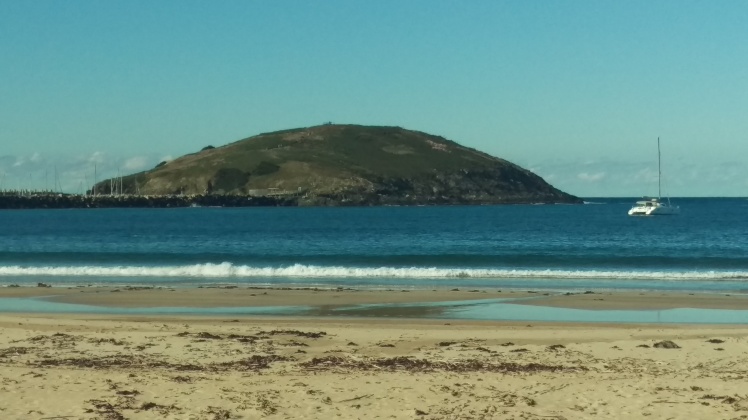 So, the next morning I got up, grabbed some breakfast, and began my trek into town. Well, the problem was that I was going to catch the bus, expect that the bus was ridiculously late, and I decided to walk. Not surprisingly, when the bus did turn up I was halfway between stops, and the bus driver had no interest whatsoever in stopping to pick me up. Well, that meant that I was going to make the hike all the way up the hill. However, on my way there, I discovered the museum. A lot of these country towns happen to have small museums, which are run by volunteers. Honestly, don’t expect to see anything hugely fantastic in these places, though you will find some interesting displays. In fact, it turned out that James Cameron was in Australia making a film, and he had decided to bring over a whole heap of stuff that was set up in the Australian Museum in Sydney. What that meant is that the museum needed to create some space, so they decided to send a number of displays to the smaller, regional museums.

Well, Coffs Harbour, or at least the main part of the town, really isn’t all that fascinating. Basically it is a tourist town, and a rather drab one at that. The town itself is very modern, but doesn’t have that really nice inner city feel about it that I quite like. Actually, the cafes up here were pretty dull, not like the ones closer to the beach. Then again, I suspect that Coffs Harbour is actually one of those places where people either retire to, or families visit on a regular basis for their holidays. Well, my auntie did live here for a time, but she was actually running a kiosk.

So, what is there to do in Coffs Habour? Well, there does happen to be the Big Banana, but the thing is that this is, not surprisingly, just a huge fibreglass replica of a Banana. I had seen it before when I drove up this way years back, but I thought I might go and visit it again. Since the buses seemed to be pretty unreliable here, I jumped into a cab, and discovered that it was pretty tacky. Well, it does happen to have a coffee shop, a souvenier shop, and an amusement park, but in the end it is basically a tourist trap. 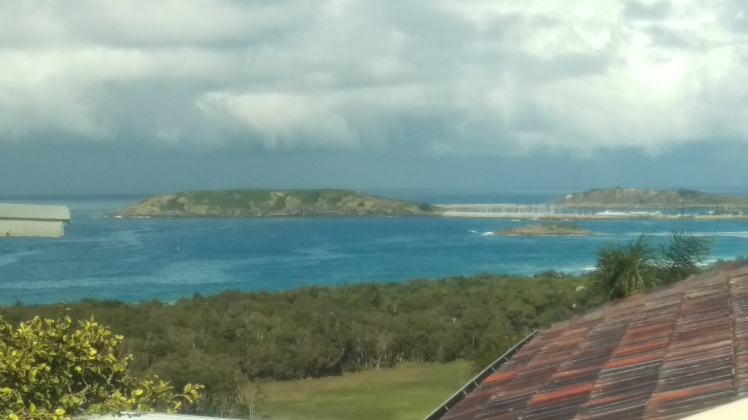 Well, it was time to go for a walk, and I certainly wasn’t interested in catching another cab. Actually, I didn’t want to wait for a cab, and buses don’t come up this far, so I went for a wander towards the beach. It turns out that this part of Coffs Harbour is in the mountains, so I did get some great views – sort of – namely because while the views were nice, all of the people that lived here thought the same thing, and built their houses to take advantage of it. However, it was still a pleasant walk, even if it only took me down to the beach past a bunch of houses. Further, there was a pub at the beach, so I decided to have a drink.

Okay, I had pretty much seen all of Coffs Harbour now, and I still literally had a day to kill. So, it was time to see if I could go and visit an outlying town, and that town happened to be Sawtell. Sawtell is another beachside community, though it feels like it is supposed to be a satellite town. The interesting thing is that as a town it feels a little more hip than does Coffs Harbour. Mind you, I caught the bus to a nearby shopping centre, and walked the rest of the way, but at least I got to watch the train go past, particularly since I had arrived at the time when the train was there.

The catch was that once again, the buses really weren’t being all that friendly towards me, so while I spent some time wandering around Sawtell, and also visiting the really nice pub that happens to be on the main road, if I wanted to get back, I was going to have to walk. Fortunately, all I needed to do was walk to the shopping centre and hope that I could catch a taxi. As luck would have it, there happened to be one there, and he was still there after I had visited the pub. So, I guess I wasn’t going to be stuck down here, nor was I going to have to make a rather arduous journey back to the hotel.

Anyway, that was Coffs Harbour, and when the train arrived, it was time to continue my journey on to Grafton.

And for those who are interested, I have another blog where I look at literature, art, film, and of course Theatre.

On to the Coffs by David Alfred Sarkies is licensed under a Creative Commons Attribution-NonCommercial-ShareAlike 4.0 International License. If you wish to use this work commercially please feel free to contact me.
-30.298612 153.109392
Coffs Harbour NSW 2450, Australia