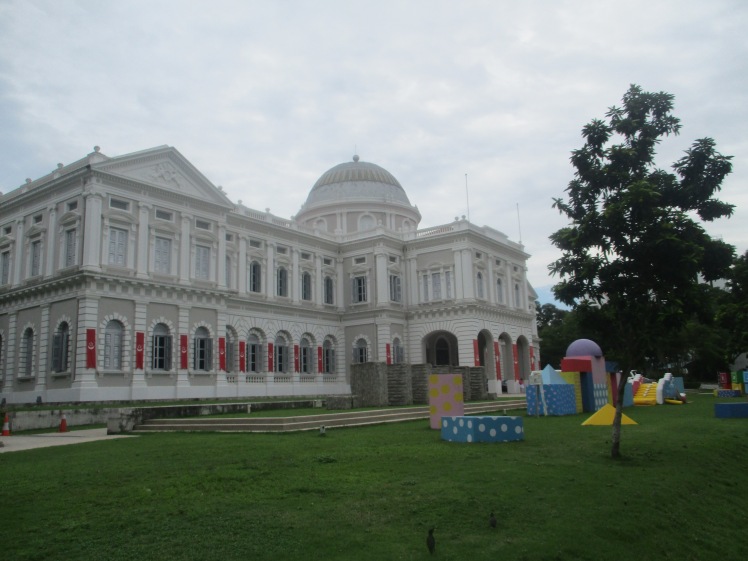 Honestly, why I though that a museum that had the name ‘The Singapore Museum’ would be a natural history museum is beyond me. One thing that I have discovered in my travels is that if you wander into a museum that has the name of the city that it is located in at the front (or at the end with the article ‘of’ between the name of the city and the word ‘museum’) then it is going to be about the city, not a building full of stuffed animals and dinosaur skeletons. Maybe it had something to do with me growing up in Adelaide, with the South Australian Museum, or living here in Melbourne, with the Melbourne Museum, where the museums are actually natural history museums.

However, one of the things that I wanted to do the last time I was in Singapore was to visit the Singapore Museum, though as I have mentioned I was half expecting it to be full of sciency stuff. Well, that turned out not to be the case. When I was in Singapore in 2015 I visited a museum down near the Marina Bay Shopping Centre where they had an exhibition on the history of Singapore through the eyes of the local newspaper (though for some reason, using the term ‘local newspaper’ doesn’t seem to apply all that well to ‘The Straight Times’). As it turned out, the exhibition that I visited, while giving me a pretty good understanding of the nature of Singapore, it’s history, and it’s culture, in the end was only being displayed through the eyes of the media. This museum looks at Singapore beyond what can be considered to be the blinkered eyes of the media.

Unlike my previous posts, this one is actually going to be quite short, namely because much of what I have said has already been said in my previous posts. The thing with Singapore is that it is a pretty structured and ordered society. This is a city where the people automatically stand aside to allow people to get off the train, a city where chewing gum is illegal, and a city where the children are literally pushed off of a seat to allow a disabled, or old, person to sit down. In fact, we in the west could learn a lot from Singapore, it is just that we really have no desire to have the government interfere in our perceived God given freedoms.

Coming of the British

I should begin by saying that before we entered the main museum we entered a side chamber which was all about Singaporean Bureaucracy. If there is one thing that defines Singapore and that is Bureaucracy, though while we in the west cringe at such a concept, for some reason it seems to work in Singapore. In a way Singapore is a Bureaucratic paradise, where everything seems to work. Mind you, I have heard stories of how children in Singapore are taught to such an extent that when Westerners come over to work they have to send their children to special schools because the western methods of education means that they simply will not be able to handle a Singaporean school. However, that does raise the question as to why, if their education is so intense, they haven’t taken over the world. However, over my time I have met a number of native Singaporeans and they are definitely in a class of their own.

Anyway, after the Bureaucratic room we wondered into another room which basically explored the history of Singapore up to independence. There is a story that before the British came to Hong Kong it was nothing more than a fishing village. Well, that seems to be very much the case when it comes to Singapore. Okay, in the Ancient history of the region there has, and has always been, people living here, however due to the location the local powers have always sought to suppress the people here. This is not surprising because if there is one thing that defines the location of Singapore and that is strategic. However, I am still baffled as to why the Portuguese set up at Malacca and not here, though I guess the two locations where much of a muchness. 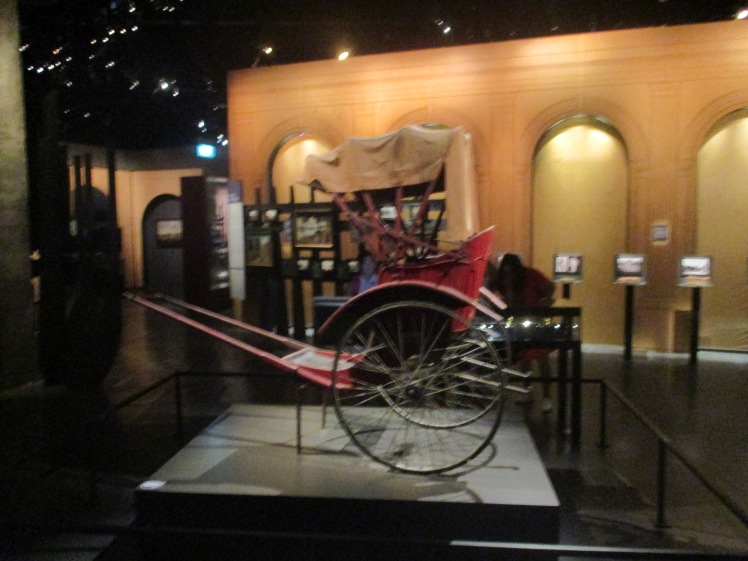 There is probably not much to say with regards to the period of British colonialism that I have not talked about elsewhere, expect that Singapore of today would not exist as it does without it. Mind you, if you were to have landed at Singapore sometime in the 19th Century I would suggest that you would not find the clean and bureaucratic world that you see today, namely because it was basically a port city. As such, you could expect to find what you would expect to find in such a city – a pretty grubby place full of thieves, sailors, and brothels. However it was still a pretty important port, if only due to its location (and was known as the Straights Colony).

Everything changed when the Japanese arrived. The thing was that while India was the jewel in the crown of the British Empire, Singapore was the city that divided the east from the west. When the Japanese captured Singapore it could be said that it was the beginning of the end of the British Empire. I should mention that my paternal Grandfather fought in the battle of Singapore and spent the rest of the war at the Changi prisoner of war camp. He never spoke about it, and in a way I am not surprised. I remember asking him to tell me of his experiences during World War II and the letter I got back basically told me to look it up in an encyclopedia.

The Japanese pretty much brought an end to the British Empire. Okay, some people suggest that it was the Suez Crisis that was the actual end of the empire, but I would disagree. After the fall of Singapore the British Empire basically began to crumble. We had Ghandi in India and we had agitation in Malaysia to break away and establish their own country. The problem was that Singapore was a world apart from Malaysia and Indonesia. Both of those countries are Muslim countries, however this is not the case with Singapore – they are basically a multicultural entity. Sure, a majority of the population are Chinese, but you also to Indians, Malays, and Indonesians.

Initially they were to be included with Malaysia, but that didn’t work, and eventually Singapore was established as a separate country. This is where we came into the final part of the museum – Modern Singapore. Basically as we wondered around this part of the museum we were confronted with a society that basically reminded me of 1960s America. In a way this struck me because, in my mind, I never really thought much about Singapore beyond what I know about it today. In a way it is a forgotten city, a city

that is very Asian in character, but is also very modern. Sure, the majority of the population is Chinese, but in a way it is more an example of East meets West than Hong Kong could ever be (though in the end Hong Kong is the much better city).

The Museum of Singapore by David Alfred Sarkies is licensed under a Creative Commons Attribution-NonCommercial-ShareAlike 4.0 International License. If you wish to use this work commercially please feel free to contact me.
1.296615 103.848510
93 Stamford Rd, Singapore 178897