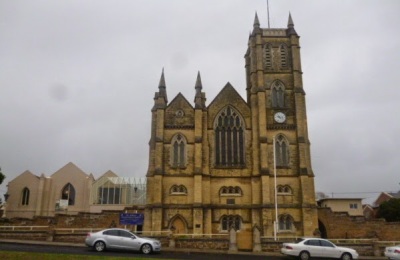 Yes, I know, the church is the people and not the building, but I wouldn’t turn down worshipping with a great group of people in a beautiful building – that was the case with one of the churches which I used to regularly attend. These days the two churches that I frequent are in the dinning room of a bible collage and in a building that I suspect was built in the sixties – both are very utilitarian in character. However there was a time when people would build beautiful churches with stained glass windows that would sit as a testament to the faith of the community, and unfortunately those days are now long gone.
Mind you, I was a little surprised to discover that this was the Warrnambool Presbyterian Church (probably because the Presbyterian church I attend is a rather small building). Not only is it a building that reminds me of the church buildings in England, but it is also quite large and visible from most parts of the town centre.
This is where you can find the church

Granted, back in the days when everybody would go to church on Sunday this building would have been packed, but even though Warrnambool would be considered, at least in my books, a city, the churches still seemed to be much larger than what I would expect in a regional centre. One of the parishioners did tell me that back in 1901 the church burnt down, which gave me an idea of the age of the current building, though he also told me that the building to the side was completed in the mid 1990s, no doubt for administrative functions (though I do note that it does have a crypt, and I would not be one to turn down an office in a crypt – I always love the idea of a church having a crypt, despite the fact that traditionally it was reserved as the burial place for the important members of the community. 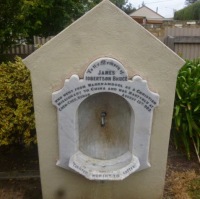 Having regularly attended a Presbyterian Church for the past two and a half years, and also visiting a couple of others, I have come to trust that this is the type of church that I will know what I am going to get when I walk in through the door. They are socially conservative, and are generally quite traditional in their worship, which is what I have grown up with attending the Anglican church. While there is nothing necessarily wrong with the Pentecostal church, I have never felt comfortable with their worship style, and other churches you never know whether you are going to get teaching from the Bible, some feel-good sermon which is more suited to a motivational seminar, or some bible-thumping fundamentalist preacher condemning everybody to hell.
Warrnambool Presbyterian is now the forth Presbyterian Church that I have visited, and I can probably say that what you see is what you get. It is not a dying church either, since it has three full time pastoral staff, two Sunday Services, and numerous support ministries throughout the week. Okay, I ended up going to the morning service where you generally find the families and the elderly (and since it was a five hour drive back to Melbourne, and I wanted to get there at reasonable time, I was not able to attend the 5:00 pm service). Also, it was the Easter Weekend so there were a few holiday makers present as well (and sometimes I wander whether people simply pick a random church to visit when they are on holidays – or even during Easter and Christmas). 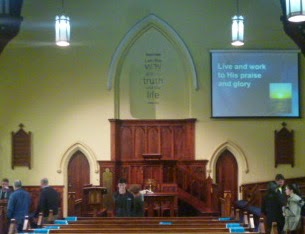 When I first walked in through the door I must say that I was a little nervous – but then I am always nervous visiting a church for the first time. However, we were greeted by a gentleman who regularly stands in the foyer to take note of who may be visiting and takes down their names so that we may be welcomed during the service. Okay, I do get embarrassed when my name is read out allowed (and I also told him the church that I attended in Melbourne, in part because I thought they were interested, and partly because I was name dropping).
As can be expected, they also had morning tea for everybody to meet and greet after the formal service, which is one of the important aspects of any church. We don’t come to church simply to sit in the pews, sing songs, and listen to some sermon – we go to socialise with other like minded people. That doesn’t necessarily mean that the sermon, and the singing, are bad things – they are great in and of themselves, but as far as I am concerned spending time with people is just as important, since it is during that time that I have made some of my best friends. Anyway, you can sit in a pew, sing songs, and listen to sermons at home these days.

One of the things that I love about some of these older churches are the stained glass windows. Many of these windows are works of art in and of themselves, and there has been many a time that I have sat in the pews and simply marvelled at the windows (which is probably why some churches dislike them because they pose as a distraction, but then I would argue that smart phones are probably a much greater distraction than stained glass windows ever could). The great thing about these windows is that many of them pictorialise the gospel message. This goes back to the medieval days when many of the population simply could not read, so relied on pictures to learn the story of the Bible. Sometimes the windows even offer interpretation of some of the more difficult passages, such as the picture above, which indicates that each of the four beasts of the book of Revelation represent each of the four gospels. It was something that I have heard about before, but it wasn’t until I saw those windows that I was reminded of that idea.
Okay, you might be asking why I was looking at the windows and not listening to the sermon, but I don’t see why I can’t do both, and anyway my eyes are always wandering around the room when I am sitting in church – it’s just that this one has some wonderful artwork in the windows. Mind you, these days pretty much all of the churches (or at least those with some technological savviness about them) upload all of their sermons to the internet, which is what Warrnambool Presbyterian also does, so if I did miss something then I can always go back and listen to it again.

Warrnambool Presbyterian – They don’t build churches like this anymore by David Sarkies is licensed under a Creative Commons Attribution-NonCommercial-ShareAlike 4.0 International License. All images on this post are © and/or ™ their relevant owners. If you are the  owner of any of the images used on this website and wish them to be removed then please contact me.