Okay, before I get started I should say that all of the cheese puns relating to this place have already been used up on my Facebook post, and just in case you have not had an opportunity to groan I will post a photograph of what was said (with the names blacked out to protect the innocent – that is if anybody is truly innocent – but then again we all like our privacy, don’t we).

So, now that we have all of our cheese jokes behind us (though if you do wish to contribute, there is always the comments section below), let us actually have a look at what this place is. Well, it is on the opposite side of the road from a cheese factory, and while it would be lovely to say that this cheese factory has been family owned an operated for over a hundred years, in reality it is not. Warrnambool Cheese and Butter is an ASX listed company, with the ticker code ASX:WCB, and currently trades for about $8.48 (though for those who know anything about the stock market, that price is never static). In fact I was interested in purchasing shares in the company, that is before it shot up 168% due to a bidding war between the Canadian company Saputo and Bega Cheese (a war that Saputo ended up winning). So, this factory a few miles outside of Warrnambool is in fact a part of a multi-national conglomerate of which you can purchase shares on the stock exchange – but then again that probably shouldn’t deter you from visiting Cheese-World because I suspect that Coca-cola has a museum as well (they do).
Anyway, I better leave it there since this may somehow be construed as financial advice and since I don’t hold an Australian Financial Services License I could get into a bit of trouble if somebody rushes out and buys into Warrnambool Cheese and Butter simply by reading this post. Mind you, this blog is hosted on a server in the United States, and it seems that it is read mainly by Ukranians entering this blog through Russian websites that have nothing to do with what I am writing (go figure) so I guess that is a moot point anyway (ahh, the wonders of the digital age). Anyway, apparently I am supposed to say something along the lines of ‘this is not meant to be construed as financial advice, and anybody who is seeking such should go and speak to somebody who actually knows what they are talking about – if such a thing is possible’.
Anyway, enough of that  because you’re probably interested in what I discovered at Cheeseworld (and if you aren’t, why are you reading this post – the comments section is below). Well, if you are expecting me to suddenly talk about how I went on a tour of a cheese factory and discovered all of the wonderful things behind making some delicious cheese, as well as what goes into making the many other diary related products that those of us who are lactose intolerant simply cannot stomach, I am sad to say, well, you won’t find that here. In fact, Cheeseworld is like one of those factory outlets where the factory sells direct to the public because, well, it is across the road from the factory. Sure, they do have a museum, but it isn’t a cheese museum, and there are no machines in there that the dairy farmers of old would use to make their cheese, but there is a museum nonetheless.
Anyway, before I tell you about the museum, I think I will say a couple of more things about Cheeseworld. No, before you ask, this is not a plug because Warrnambool Cheese and Butter is paying me diddly squat to write this post, and even if they were, I would probably still write what I am writing (minus the section about them paying me diddly squat). So, I must say that when I first stepped in through the door, after taking a few photos so I could add a bit more colour to my writing, I was quite surprised. In a way I was expecting a little more than just a factory outlet that looked like a roadside service centre (complete with a petrol station next door, which is no doubt used by the company). Sure, they did have an icecream parlour that sold some rather delicious icecream (thanks to my friend’s recommendation), as well as milkshakes, and they also had an area out the back where a number of products from the local area where stocked (which in some way all had connections with a nice cheese snack, such as olives and wine), and the prices were not all that bad either. They even had a counter where you could indulge in some cheese tasting, though the crowds of tourists that flocked to this place made it a time consuming endeavour. 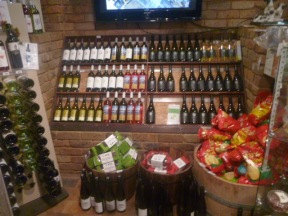 I’ll have to see if my friend has cracked open his wine yet
Usually I would expect the gift store to be positioned after the museum, but then again this is a country town, and as I suggested, it is more like a road-side diner crossed with a factory outlet, so I guess the museum was simply tacked on to encourage people to pull over for a bit of a rest, and to spend some of the hard earned cash (not that the prices were ridiculously expensive).
Mind you, this wasn’t the first time I have been here, but after surviving the rigours of the Great Ocean Road I would generally give this place a miss (especially since previously I have had a rather tight time limit). However, this time, since I was staying in Warrnambool for the weekend, I thought it might be an idea to come and check this place out. It is about a fifteen minute drive from the centre of Warrnambool, and even though they do claim that it is located in the town (or should I say suburb, since Warrnambool has grown somewhat since I was a kid) of Alansford, the actual township is a five minute trek back towards the city. However, you can call it your classic tourist trap since you need only spend half-an-hour of your time wandering around here (not counting the money that you spend on the three grocery bags full of goodies that you walk out with) before continuing your journey.
So, out the back you come to the Cheeseworld Museum. However, as I have suggested, it is not what you would expect from a museum that happens to be attached to a cheese factory. Rather it is a collection of old stuff from somebody’s farm (though I suspect the stuff used to belong to the people that originally set up the factory). It is one of those museums that simply attempts to show everything in its collection, rather than having targeted displays. Okay, the items are collected into various categories, however the curators have not gone to the trouble of labelling any of the items, or having any signage explaining the story behind the items.

A couple of old record players
Actually, now that I come to think of it, there were a few signs about the place, but those signs generally all said the same thing: look but don’t touch. Maybe it has more to do with discouraging children with sticky fingers from breaking any of the exhibits, however if you are like me, when you see a sign that says ‘don’t touch’ you automatically what to touch it. Maybe it has something to do with that kid in me that wants to try everything out. 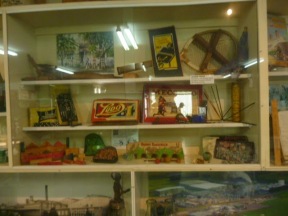 Some things to keep the kids entertained on the farm
They also had quite a lot of furniture, as well as a collection of vacuum cleaners. It seems like back in those days people didn’t throw things out the way we do now. Mind you, there are still people who have a shed where all of their junk is stored, just in case one day it may come in handy, or somebody wants to set up a museum in their honour and have each television that they owned on display (or even every mobile phone).

I don’t think I’ve ever owned a vacuum cleaner
It seems like I am posting an awful lot of photos up here, but I did take quite a few of them as I was wandering around the collection of miscellaneous items that were all crowded into this shed, so here are some more: 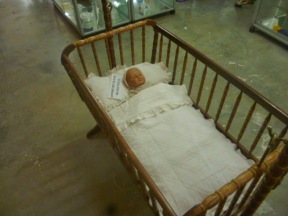 They were a little bit too small for me.
You might be forgiven thinking that the only things in this museum were the items that you would find in the farm house, but they also included quite a number of items that you would expect to find in the many sheds that scatter the farm yard. In fact there were so many tools that they would make the average mechanic look under resourced, but then I suspect that has something to do with the farmers (and their hired hands) performing most of the maintenance work themselves. 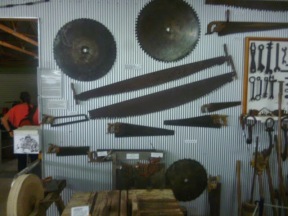 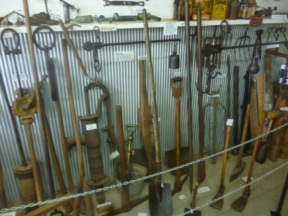 The ultimate collection of tools
Amongst all those other tools, I also discovered this:
Anyway, I feel that I have turned this into a photo album, and to be honest with you, I would hardly have called the place fascinating. They did have another room which was jammed full of engines, but I think I will leave the photos, and the post, at that. As for us, we simply walked back into Cheeseworld and purchased some goodies before making our way back to Warrnambool.
In the end, it was okay, and doesn’t take up too much of your time, but don’t expect anything on the scale of the National Gallery of Victory, and they don’t offer guided tours, but if you want to stretch your legs, have an ice cream, and even buy some cheap cheese (along with a bottle of red), then it doesn’t take too much time out of your grand adventure.

Cheeseworld – More than just a Cheese Shop by David Sarkies is licensed under a Creative Commons Attribution-NonCommercial-ShareAlike 4.0 International License. If you wish to use this work commercially please feel free to contact me.